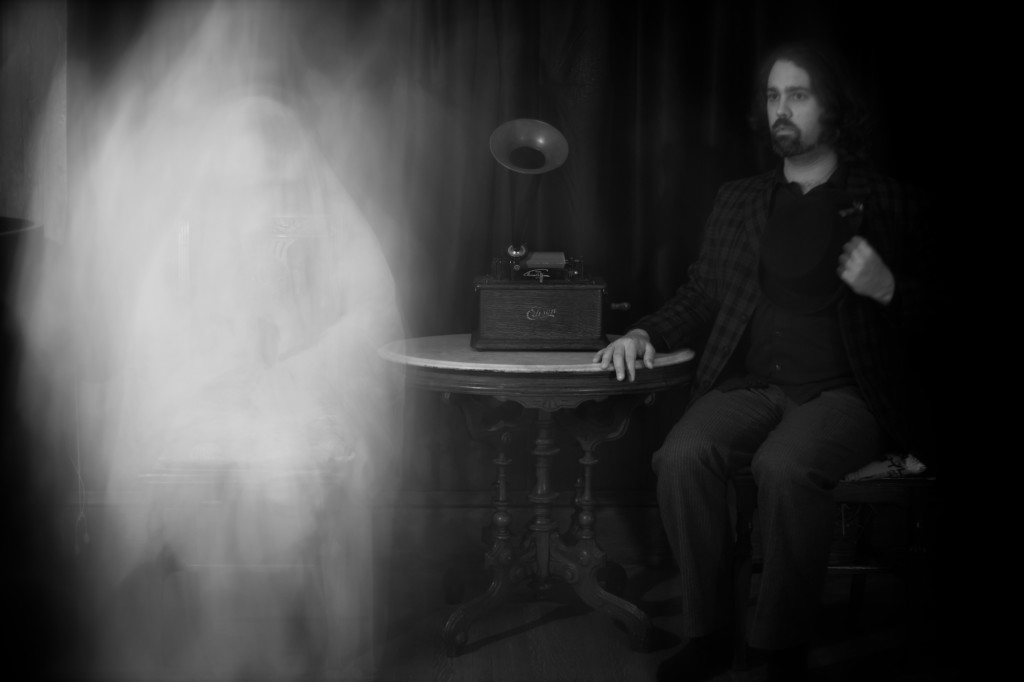 The Parlour Trick’s first full-length release, A Blessed Unrest, is named after a well-loved quote by Martha Graham. Creatively and thematically, this album is all about that inescapable trope of the “Madwoman in the Attic”. Some of the compositions are dense and meticulously arranged. Others are more sparse, ambient soundscapes. Instrumentation includes piano, violin, harpsichord, theremin, voice, celeste, percussion, bowed glockenspiel, accordion, bells, musical saw, an ancient wheezing pump organ, a nonagenarian typewriter, and cutups from wax cylinders (both freshly recorded and repurposed). Ninety-five percent of the material was recorded in a century-old Craftsman house, including ambient recordings of creaks, groaning floorboards, mysterious knocks and rustles. Both ultra-modern binaural recording techniques and antique devices were used to piece it all together. Buy Now

Violinist, thereminist and vocalist Yayanos created The Parlour Trick music project in 2006 after being compelled to explore and unpack some of the creepier, more dysfunctional aspects of Victoriana. As both a session player and a touring performer, her body of work is informed by lifelong study of classical, folk, and experimental music. Yayanos has collaborated with a wide variety of acts including Faun Fables, The Dresden Dolls, Angelo Moore, Beats Antique, Halou, Stolen Babies, HUMANWINE, Jill Tracy, Elegi, Sport Murphy, The Living Jarboe, Edison Woods, Raz Mesinai, Pinataland, David Garland, Thomas Truax, Butch Morris, The Vau de Vire Society, Kim Boekbinder, The Vanity Set, Love Life, and the Walkmen. In recent years Yayanos has also done a fair amount of film-scoring, most notably for The Narrative of Victor Karloch and The Mill at Calder’s End, two Victorian ghost story puppet films partially funded by the Jim Henson Foundation, and for the award-winning, feature-length psychological thriller, Empty Rooms. Her compositions, arrangements, and collaborative experiments with Cantrell for The Parlour Trick revolve around fusing classical sounds with varied folk traditions and electronic palettes to create a unique “uneasy listening” experience. The loose narrative of The Parlour Trick’s first album A Blessed Unrest, inspired by Yayanos’ fascination with 19th century concepts of the afterlife and mourning rituals, can be considered a creative response to outmoded perceptions of female hysteria. Many of the pieces composed or co-composed by Yayanos are conscious riffs off (t)rappings of Spiritualism and lingering concepts of the “monstrous feminine”. Yayanos began collaborating on material with A Blessed Unrest duo partner Dan Cantrell in early 2009.

An Emmy-award winning composer for film and television, and an accomplished multi-instrumentalist, Cantrell has written librettos for several theatre, dance, and opera performances, scored all three seasons of The Marvelous Misadventures of Flapjack original animated series, and memorably provided the live in-studio music for Mark Kistler’s Imagination Station program for PBS. He can be heard on the albums of Tom Waits, Joanna Newsom, Beats Antique, and the Toids, as well as in major motion pictures such as Paramount’s Mean Girls, and Roberto Benigni’s The Tiger and the Snow. Cantrell’s compositions and arrangements for A Blessed Unrest fuse modern experimental elements with conscious nods to the music of Erik Satie, Bela Bartok, and J.S. Bach. Other recent works include Emmy Award-winning scores for Home Front and Hope on the Streets (a PBS Documentary about gentrification in the San Francisco Bay Area), and the Gerbode Grant sponsored commission of the Rootabaga Opera (a Fire Arts infused multimedia shadow play and lyrical ballet based on the children’s stories of Carl Sandberg) presented at The Crucible’s 2009 Fire Arts Festival. Some of Cantrell’s other recent projects include the Golden Gate Award winning score for Divided Loyalties (a documentary about cultural identity on the divided island of Cyprus) and a commission from Kitka women’s vocal ensemble for the composition and direction of Musical Fortunes, which was the opening and centerpiece of the 2007 Jewish Music Festival, and explores roots and ties between Rom and Klezmer music traditions in Eastern Europe.

In 2009, Yayanos and Cantrell began working slowly but steadily on Parlour Trick material as a collaborative duo. Whenever Yayanos (at the time residing in New Zealand) would travel back through California, she was invited to stay in the guest room at Dan’s home, a stately old rented Craftsman in Oakland. Upon each trip, a new ghostly song or two was born. By mid 2012, a full album of material had been produced, engineered, and mastered. Yayanos launched an official Kickstarter for the album in November of that year. Thanks to the generous support of hundreds of backers, the album has now been produced in digital, CD and vinyl formats. One music video for Cantrell’s composition Half Sick of Shadows, starring dancer Rachel Brice, has been made. A second music video for Yayanos’ composition, The Lady of the House of Love, is currently in pre-production.

Press & Accolades for “A Blessed Unrest”

“Warning: Haunted mp3s! Downloading and listening to this album will release a phantasm into your abode. She will appear in your dreams, whisper to you from behind your shoulder when you are home alone at night, and eventually, crawl inside your heart, which she will never leave.” ~Madeline von Foerster

“A stunning, textural piece of work that dives straight into the viscera of longing and melancholy. This is the kind of music to have been discovered on a wax cylinder in the attic of a particularly eccentric late great-aunt, conveying the subtle beauty of disused objects in dusty corners. By turns propulsive, meditative, lyrical, and, above all, flawlessly orchestrated and arranged. The layering of instruments and sounds and sources is immaculate in its nimble choreography. Evokes chills like a brief brush along the spine from the fingers of a revenant.” ~Gregory Scharpen (KALX)

“Every once in a while [you] run across an album that is best listened to in total isolation, this is one of those. You can listen to it on speakers, letting it fill the room, but parts are quiet, and parts are gentle. And parts aren’t either of those. But immersed completely it’s an hour of pure sonic bliss.” ~Audio Bomb

“Weird […] ambience interlaced with classical and chamber music influences. One of the best examples of just how amazingly complex Dark Ambient can be. A perfect release. You’ll enjoy every bit of it.” ~Deprivation Blog

“[Meredith Yayanos] was channeling spirits while her hands moved through the air,  grasping at nothing,  but eliciting wild sounds from the theremin.” ~Veronica Varlow

“The Parlour Trick invokes the whimsy of Erik Satie and Dead Can Dance while simultaneously hinting at the sensual melancholy found in the ballads of Tom Waits and Nick Cave. This is the music that ghosts drink and make love to.” ~Clayton B. Payne

“I love this record so goddamn much.” ~Wil Wheaton

“Mournful, soaring, funereal, echoing, atonal, breathless, faraway, weird, ambient, submerged, wailing, quavering, broken. […] When you listen to this album –which you really need to do– stick around for the conclusion. It’s worth braving the silence for.” ~Three Attic